SURPRISE BONUS POST DUE TO PACT DEFAULT! Don’t you love the blog pact?*

Greetings! Today is nostalgia day. It is nostalgia day because I have seen no less than four Sailor Moon-related movies/TV episodes in the last week, and I just have a lot of feelings about Sailor Moon, okay. It’s great. Let me tell you why.

One of the biggest problems in media is the lack of fully developed female characters. It’s not that female characters don’t exist (though there aren’t nearly enough of them)–it’s that most of them are cast as either girly and therefore annoying, or tomboys and therefore cool. And, invariably, there is only one of them, drowning in an all-male cast (this is called “The Smurfette Principle”). This equating of “girly” with “weak and annoying” is really problematic, because it basically says that girls can only be strong and powerful by becoming like men (and that men have to behave in this certain way, too). You have to act like a boy in order to be taken seriously, and that means you can’t like shopping or cooking or the color pink, and god forbid you should ever raise your voice in a high-pitched squeal of excitement. This is what we call “internalized misogyny,” folks, and it is so much bullshit.

Luckily, not ALL media falls into this trap, and beloved children’s anime Sailor Moon just happens to be one of the very best examples of demonstrating GIRL POWER instead of GIRLS TRYING TO BEHAVE LIKE BOYS BECAUSE THEY’RE AFRAID OF BEING MOCKED POWER.

Because Sailor Moon starts with a mostly female cast, the characters themselves have to be differentiated by their personalities, much the way that male characters are in most other forms of media. Being female is not a defining characteristic; it’s a base level to be built upon. They’re also all bad ass fighter ladies, so being “the girl who can kick ass” is not a distinguishing characteristic, either. This sets it apart from shows like, say, Kim Possible or Xena (both of which I love, don’t get me wrong–no shade thrown here), where the fact that the protagonists can fight is an essential element of their personalities. Everybody fights in Sailor Moon. Like, literally the entire cast. You don’t get a cookie for being able to take a punch.

So how are they distinguished from one another? I’m glad you asked, because it definitely isn’t their hair color (though that helps with the visual cues). Let’s break it down:

Notice how they all want different things, and are each defined by actual things people do in real life? Not “she’s a tomboy,” but “she plays this sport specifically,” which is then balanced out by another trait like love of baking or science or romance novels. Between the five of them, they pretty much cover the bases; anyone can find a character to relate to in some way (my personal favorite is Jupiter). These characters might be silly children’s show characters, but a lot more effort has gone into making sure they are whole people than many more “serious” TV shows have bothered with for their female characters. They aren’t just one thing–they are many things, like real people.

What’s more, the Japanese anime–the one that wasn’t watered down and written over to avoid offending delicate American sensibilities–also includes homosexuality (Neptune & Uranus are lovers; so are the male villains Zoisite and Kunzite) and questionably transgender characters (the Sailor Starlights, who are men normally but transform into women to fight. How’s that for a gender bend?), and it does so without turning them into jokes or making too big of a deal out of it. These things just are, and the characters have much bigger fish to fry. Refreshing, isn’t it?

Kids need to watch shows like Sailor Moon in order to see female characters being actual people instead of token girls. When I say “kids,” I mean boys, too. Boys especially, in fact, because boys who only watch media with 2-dimensional female characters grow up to believe that women only exist in two dimensions, and that’s how sexism happens. Media depictions color real-life interpretations, and token lady characters just won’t cut it. 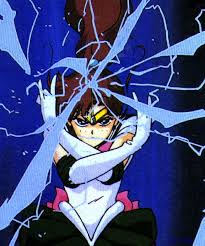 And don’t give me any of that “boys won’t watch girly things” crap. Sailor Moon is literally about fighting demons. Shit explodes and people get beat up and all kinds of bad ass stuff happens, which is fun for the whole family. Who cares if they’re wearing skirts to do it? That makes for better mobility anyway. Girly girls can kick ass, too.

“Take hold of my hand and you’ll understand what it truly means to be friends.” –The Power of Love lyrics (from Sailor Moon R)

*If you don’t remember what the blog pact is: myself and a group of my esteemed friend-like people all have blogs, and we keep each other honest by tying our fates together. If one person misses a post, everybody writes an extra one that week. They are at least as awesome as I am if not more so, and it would behoove you to check them out:
–Anne Bean
–Alexandria Darcy
–Carved From Thought

5 thoughts on “Why Everyone Should Watch Sailor Moon”