Yesterday, I gave you all an earful about why you should criticize things that you like, because it is possible for a show to be really and truly excellent and still deeply flawed. Today, we’re taking things in a whole other direction, and I am going to tell you about a show that I love to pieces even though it is the worst. Literally everything about this show is bad, from the writing and characterization to the production values to the entire premise. And yet it is one of the greatest things you are ever going to come across, and it was actually something of a cultural phenomenon when it first came out, persisting in the public imagination for decades after it went off air. Ladies and gents, may I present to you:

First, a little background. When I was growing up, I missed a lot of the shows that other kids my age were watching. I had never heard of Clarissa Explains It All, I had zero interest in Boy Meets World, and to this day I cannot recite the rap to The Fresh Prince of Bel Aire. These were not the shows I was watching. Instead of Nickelodeon and Cartoon Network, my parents had me happily devouring the contents of TV Land–Green Acres, Gilligan’s Island, the classic Batman with Adam West, The Beverly Hill-Billies, etc. It should come as no surprise, then, that one of my very favorite shows, introduced to me by my father, was Thunderbirds–a British scifi series from the 1960s.

Thunderbirds, created by Gerry Anderson, is a show set apart from all others by a number of different things, but the most immediately relevant is this: it is made entirely with marionettes.

Yes, you read me correctly. This is a show done entirely with puppetry. Actually, the show’s creators invented their own word for what they did: supermarionation. I guess because “puppets” didn’t sound sophisticated enough or something. Because the show is done with puppets, all of the “acting” is stilted and slow, there is no facial expression to speak of (except the occasional ridiculously exaggerated open-mouth-open-eyes stare), and occasionally you will notice that the characters are shorter than the shrubbery around them. Whenever the camera needs to zoom in on someone doing something up close with their hands, though, they just film a regular hand doing it, because who can be bothered with all of that animating, right?

You might be wondering what this show is actually about, and I’ll get to that in a second. I just want you to remember while I am describing it that all of this is done with MARIONETTES.

Okay. So. The actual plot, then.

While written in the 1960s, Thunderbirds is set in the 21st century, so it’s meant to be futuristic. It follows the lives of eccentric ex-astronaut hermit billionaire Jeff Tracy and his five fully-grown-but-still-living-at-home sons (Scott, Gordon, Virgil, Alan and John–all named after astronauts), their grandmother, a sixth pseudo-adopted son Brains, their butler Kyrano, and his daughter Tin-Tin on their super secret private island somewhere in the Pacific Ocean. But things are never dull on Tracy island, because this super secret private island is secretly the super secret base of International Rescue–the world-famous, politically neutral, super-secret rescue organization.

Yes, you heard me. The entire plot of this show is basically that a billionaire got bored and decided to turn his sons into a rescue operation.

So here’s how it works: John spends the majority of his time all alone in Thunderbird 5–their private space station, which sits in orbit–monitoring police and radio signals. When he catches wind of some disaster going on somewhere on Earth, he sends a signal down to the super secret island mansion, and his brothers all take their Batcave-style slides down into the super secret Thunderbird cave, where they change into their uniforms and become the totally mysterious International Rescue team. Oh, did I mention that their identities are all suppose to be a secret? They don’t wear masks or anything, but their identities are a secret, and also the press isn’t suppose to be allowed to take pictures of them, which for some reason is a strategy that actually works? I guess paparazzi aren’t a thing in the 21st century–O WAIT.

Anyway. In order to carry out these daring rescue missions, the boys have to use their machines, the Thunderbirds. Thus the title of the show. You’ve already met Thunderbird 5, which sits in (secret!) orbit around planet Earth and is primarily manned by John. Then there’s Thunderbird 1, manned by oldest brother Scott, which is the fastest and always arrives on scene first to take stock of the situation. Next comes Thunderbird 2, flown by Virgil, which is the hangar ship–it carries all of the gear they need to perform the rescue. Sometimes the gear required is Thunderbird 3, the rocket ship–manned by Alan. Sometimes it is Thunderbird 4, the submarine–manned by Gordon. They are also occasionally helped out by their British operative Lady Penelope, who drives a pink convertible and has an unflappable butler named Aloysius “Nosey” Parker–I swear to god I am not making that up. 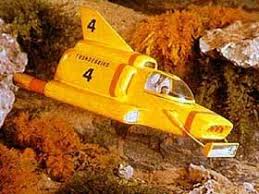 And here’s where it really gets good. No matter what the situation is–say, some workers are trapped in a mine, or a bridge is going to collapse, or a skyscraper is going to fall over–no matter what it is, something blows up. There is one episode where a cable snaps on a bridge and the whole thing explodes. It’s like the action movie explosion rule, but on steroids. And remember that these are puppets–the explosions are all done on scaled-down models, and every time someone expresses dismay at what’s going on, it’s with a plastic deadpan expression. I dare you to not laugh.

I could go on about the ridiculous hilarity of Thunderbirds all day long, but I think, ultimately, it’s best to let it speak for itself:

Remember: this is a show that was wildly popular. This show persisted for decades. There were spin-off movies and tie-in records and celebrity guest stars. You should see the fanfiction that people still write about it. At one point, this was the epitome of television, and it is unequivocally terrible–and you will not regret a moment spent watching it. Amazing, huh? F.A.B.

“Why should people go out and pay money to see bad films when they can stay at home and see bad television for nothing?” -Samuel Goldwyn

1 thought on “Thunderbirds Are Go!”