I know. Vaguest title ever, right? But actually it is a name of a thing. But the thing has another name, too. You might know it better by the other name, which is Swimming Anime. Although most likely you have not heard of that either, because most people don’t spend as much time on Tumblr and reading new media blogs as I do. Oh well. Free! is a really freaking cool thing, even though I have zero interest in ever watching it or participating in its fandom. That probably sounds ridiculous, but, as usual, I can explain.

First, a little background. Swimming Anime is not a real anime. It was created by anime production company Kyoto Anime (KyoAni) as a demonstration of skill, and the original video was a title-less, 30-second trailer. Never at any point was there any intention of making a real show out of this thing. But then Tumblr got their hands on it, and a fandom sprung up around “swimming anime” within 48 hours. You can read a more detailed summary about it on The Mary Sue (which is an excellent website), but long story short, the artificial fandom that grew up around this FAKE anime was so vocal that the company ultimately decided to turn it into a real thing. And they are calling it Free!

Let me say that again, in case you weren’t paying attention. A fake anime developed such a vocal fanbase that the production company felt compelled to make it real. With literally nothing to work with, an entire, very vocal fanbase grew up around an untitled trailer. Welcome to the Internet. 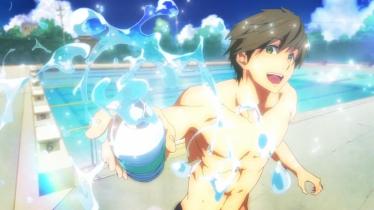 …here I realize that I have to take a minute to explain Tumblr, because enough of my readers don’t use it for my next point to not make sense without elaboration. Tumblr is a social media website. It is described as a blogging platform, and sometimes people do blog on it, but mostly it is used as a place to collect GIFs and comment on TV shows and interact with a variety of people on a variety of topics and occasionally (okay, often) go completely mad in the presence of thousands of strangers. There is even “Tumblr-speak” for the more indoctrinated, which mostly just involves re-structuring sentences in ways that would give your high school English teacher conniptions (“I found this particular scene to be quite moving emotionally” becomes “omg this i can’t even THE FEELS *dead*”, etc.). I like to think of it as a demented form of museum curation, where you find things that you think are funny or interesting or weird or worthwhile, and then you put them all up on your dashboard and invite people to come see inside your head.

While Tumblr can be a powerful force for connectivity, allowing people all across the world to share and communicate, it can also, often, be a bit…how to put this…incredibly immature. And also super judgmental. Most of the people who use Tumblr seem to tend toward the younger end of the age spectrum, and there is an intense in-group mentality within fandoms and certain schools of thought that can quickly turn vitriolic. For this reason, a lot of people steer clear of Tumblr and consider it to be a dark spot on the Internet, which is understandable if not entirely justified.

The sad thing about this perception is that it often results in people dismissing Tumblr as a frivolous hobby-site for bored middle schoolers. This is a mistake. Tumblr is an insanely powerful tool, and Free! is the proof in the pudding (I don’t think anyone has ever used that cliche in the same sentence as “Tumblr” before). Tumblr took this shell of a concept–a show that literally didn’t have a title–and collaboratively built a world around it. People from all across the country and the world contributed to the story, developing it into something that could conceivably be made–and that the studio wanted to actually make. Sheer, obsessive fanboy/girling made Free! happen. Wow.

We’ve always known that having a strong fanbase can really bolster a show and keep it afloat (see: the Firefly movie Serenity, The Lizzie Bennet Diaries, Arrested Development, hell even the “Frodo lives!” movement back in the 70s), but this is the first time that sheer fan dedication has resulted in a thing actually coming into existence where it was barely even an idea before. This is a production company listening to the fanbase and trusting it enough to put money behind this project, instead of ignoring potential customers (like Warner Brothers seems to be doing). This is regular, every-day people using the tools of the Internet to speak out about the media they want, and the studio listening. Tumblr is what made that possible, and the potential impact this could have on how we do media is just staggering. This is what “new media” is about.

Free! is not a show that I will ever watch. I’m not much for animes in general, and this one looks a bit fan-servicey for my taste. But I congratulate all of the fans of Swimming Anime on their success, and I thank them as well, for proving that a vocal fanbase is not to be ignored. Fans are an asset, not a detriment, and production companies need to start taking note. It is my sincere hope that more works go the way of Free! in the future.

“Ever since I started to get recognition I’ve picked out certain fans and reverse-stalked them.” -Jim Carrey