Even though I haven’t the time or energy due to leaving for Dallas in approximately 18 hours (at the time of writing, which is Tuesday, because auto-posting is a glorious thing), we got another blog pact default this week, which means I am writing a bonus post. Geeee, thanks, Anne! I hope getting your MFA was worth it. (Seriously, though, congrats)

When searching through my list of Things to Write About (yes, I have a list), I came across this one item that just said “what the hell are epilogues.” Sometimes my notes to myself are overly aggressive, but the point stands: epilogues are hard to do and rarely done well, and even less rarely done for the right reasons. In light of this, and because I haven’t done a list-y thing in a while, I’m going to do some collating. Let’s talk about books with terrible epilogues and why they are terrible. Need I mention that this is spoiler-y as shit?

Yup. Going for the big dog first. I realize that Crime & Punishment is, like, a great literary classic and hugely influential and everything, but I didn’t much care for this particular book. My main problem with it is that the story was originally written in serial form, published over an extended period of time, and so it repeats itself a lot to make sure that the readers remember what’s happened so far. Unfortunately, it was never edited down when it got bound into an anthology. It’s kind of like watching a show on Netflix where every episode starts with a “last time on” and ends with a “next time on,” so you see every plot point at least three times, which is super annoying and boring as shit. I have other complaints, but I am going to can them for the sake of this post’s word count, because my lack of affection for this book is neither here nor there.

Thematically, Crime & Punishment is a meditation on the dangers of nihilism and Neitzsche’s “superman” theory, exploring what becomes possible when an individual doesn’t feel beholden to a God above to behave in a morally acceptable way, and believes himself to be inherently superior. Theology is a huge part of this story, with the implication that Raskolnikov’s insanity and subsequent immorality stem from his atheism, aggravated by encountering philosophical ideas that are dangerous when taken too literally. The book is arguing that morality comes from God, and without God there can be no morality. Whether or not you agree with that (I don’t), the message is pretty easy to pull out of the narrative.

And then there’s the epilogue, where Raskolnikov is in prison, but granted redemption through a pious but besmirched woman, Sonia, who literally heals him with her love and forgiveness. Never mind that her actual presence in the novel is almost nil (I’m not even going to touch her complete lack of personality–I forgive you, 1860s Russia); this weird little redemption arc is built entirely on her piousness, and it’s just kind of tacked on to the end as an after thought. Rather than allowing the story and its themes to speak for themselves, Dostoevsky had to tie everything up in a neat little yay-Christianity bow where his protagonist gets the girl and the promise of a better life. You know. Once he’s out of jail. It’s practically a rom com ending.

Lesson learned: Let your readers figure out thematic meanings for themselves. You don’t have to cap the story with a heavy-handed, thinly-veiled thesis statement. Readers are smart. They can draw their own conclusions. 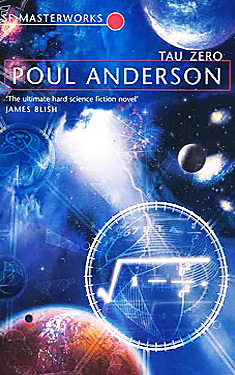 Despite my penchant for science fiction, I’ve never been a fan of the harder science stuff. Most of it goes over my head, so while I have a great deal of respect for it, I don’t find it terribly interesting to read. But this novel is a different story. Tau Zero is one of the first semi-hard-scifi novels I read and enjoyed in its entirety, and I would highly recommend that you read it–until the epilogue. Just skip that part.

Tau Zero follows a crew of astronauts who have been sent on a voyage to the nearest star, Alpha Centauri, in order to establish a human colony thereabouts. Their ship is designed to accelerate to the midpoint of their journey, and then decelerate for the remaining section. Unfortunately, the ship hits an asteroid and its brakes are knocked out, so instead they end up accelerating to the end of the universe. Like, the literal end. Thanks to relativity, in the space of only a few years on board the ship, they watch all the stars and planets around them die as the universe begins to shrink, and then they ride their ship right into the eye of the second Big Bang.

This is where the story should have ended, because predicting what would happen to a ship that traveled through the literal end of the universe and into a new universe beyond is, quite frankly, beyond ridiculous. For a novel that calls itself hard scifi, making such a narrative claim is even more absurd, because you would then be suddenly stepping outside of the reality created by the book up until that point. Sadly, that’s exactly what Tau Zero does.

And it doesn’t just let the characters survive the end of the universe. It actually goes on to drop them off on an Eden-like paradise planet that is close to but not exactly matching Earth, and has them frolic naked through the sunlight while rebuilding the human race. I shit you not: this story ends with a Genesis metaphor.

Lesson learned: If your epilogue isn’t in logical keeping with the world building of your story, especially if your story has hitherto adhered to a scientific reality and the epilogue requires you to completely abandon all such pretenses, don’t write it. It’s okay to end your story with a mystery when your story ends at a place that invites mystery. You don’t have to know how it all ends in order to tell the story properly. Don’t insult the narrative by giving it a half-assed ending.

I know. I couldn’t have picked three more disparate novels if I tried, right? But terrible epilogues know no genre, and so we must forge on. You probably know what Harry Potter is, but in case you don’t, basically there’s this kid Harry who finds out he’s a wizard, and has to fight the Dark Lord Voldemort to save the world, and there’s a bunch of stuff about love and self-sacrifice. I actually quite like Harry Potter, although I can complain about it until I’m blue in the face. In this particular instance, though, we’re just going to focus on the ending, which commits the worst crime an epilogue possibly can: it tells us about the characters’ future children.

For the love of god do not do this. Rowling’s epilogue was a particularly egregious example of this, because she gave all of the children ridiculous names in an attempt to remind us which characters we should be honoring, and then tried to roll in redemption for Draco Malfoy by giving him a wife. But it’s terrible in the more general sense, too. Of course, the impulse behind this kind of epilogue is understandable. Every author has their own head canon about what happens to their characters after the story is over, and the temptation to set those things down in an epilogue can be really intense.

Once the story is over, it’s over. Tacking a “where are they now” onto the end of your book just to show off your personal ideas about where characters might end up is not only self-indulgent, but it also insults your readers and their own conceptions of your characters. Don’t kill your story on the last page. Let it breathe naturally.

Lesson learned: Your head canon does not need to go in the epilogue, and for the love of god do not make mention of your characters’ future spouses or children. When the story is over, stop writing. You’re done. It’s in the readers’ hands now.

I tried to think of an example of an epilogue that I thought was good for this post, but I couldn’t manage it. This is, most likely, because a good epilogue doesn’t stick out in your memory. Instead, it blends seamlessly into the back of the story, so that you’re left thinking about the story itself instead of the tacky ending. With epilogues, as with prose: if you’re doing it right, nobody will notice it.

P.S. To the Americans–Happy 4th of July! To the rest–happy random day in the calendar!