I read a book! You might not know it judging by how little I’ve written about them lately, but I’m pretty much constantly reading something (if you want to know what I’m reading right now, there’s a goodreads widget on the bottom of my sidebar – let’s be friends!). This time, the book I read was Sir Arthur Conan Doyle’s The Lost World (1912), which inspired Michael Crichton’s Jurassic Park series, which in turn spawned the movies of the same name. The Lost World is one of those books that’s often cited as part of classic scifi canon, along with things like Mary Shelley’s Frankenstein and Robert Louis Stevenson’s The Strange Case of Dr. Jekyll and Mr. Hyde, so I figured it was high time that I actually read it. And boy was it an adventure.

The Lost World is the tale of journalist Ed Malone, two scientists called Professor Challenger and Professor Summerlee, and famous explorer Lord John Roxton as they travel deep into the jungles of South America to a hidden plateau, where Professor Challenger claims to have encountered prehistoric creatures. Spoiler alert: there are prehistoric creatures. Adventure and a lot of bickering ensues.

First of all, I have to mention that the era in which this book was written very much informs its sensibilities. The thing is full of blatant misogyny, racism, and even genocide–which is depicted as a gleeful and wondrous occurrence. You usually run up against this sort of thing when you read old school literature, of course, but that doesn’t make it less disturbing. Here are a few of my favorite misguided gems:

Essays could be (and probably have been) written about the bigotry shown in books like The Lost World, but that’s not actually what I want to talk about, so instead I’m just going to leave it at “wtf?” and move on. Because racism and sexism aside, The Lost World is actually a really entertaining book, you guys. 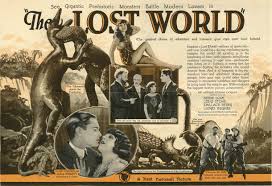 The voyage is a little bit slow to start, but the plot is not. It takes the book 78 pages to get out of London, but those pages are not wasted. In fact, something absurd and excellent is happening pretty much all the time, whether it’s an action sequence or a hilarious argument or even just Malone being a sarcastic dumbass. This is mainly due to the extraordinarily contrary and aggressive nature of Professor Challenger, who might be the greatest single example of the I-don’t-give-a-fuck mentality that I have ever witnessed. Challenger is the reason the expedition happens at all, as two years prior to the narrative he discovered the plateau by himself, but was unable to bring back definitive proof and thus became the laughingstock of the scientific community and the world. Rather than accept the reasonable doubts leveled at him and proposing a return journey immediately, Challenger basically spends two years picking fights with other scientists and literally throwing journalists out of his house, much to the chagrin of his wife. What’s more, Challenger seems to get a kick out of confusing people, and he often goes out of his way to be mysterious–sometimes to great comedic effect.

When he finally does propose a return journey, it is in excessively dramatic fashion at a public science lecture, where he very nearly starts a riot–and meets his primary antagonist, Professor Summerlee. Summerlee is every bit as contrary as Challenger, but his abrasiveness primarily asserts itself through acerbic side-comments and direct attacks on the character of anyone who crosses him. As you can imagine, putting Challenger and Summerlee together never stops being funny; they won’t even pause their witty banter long enough to run away from savage pterodactyls. The absurdity of it is delightful, as is some of the hilariously out-dated “science.”

Hilarity aside, The Lost World is also quite action-packed. The dramatic run-for-your-life sequences don’t pop up until around page 150, but once they get going you’re practically tripping over them. Most of the second half of the book is spent in mortal peril, which makes for some highly entertaining reading.

Of the old-school literature I’ve read, I think The Lost World is one of my favorites. Of course, The Adventures of Sherlock Holmes is another favorite of mine, so perhaps I just like Doyle. At any rate, this is definitely a book worth reading. You can probably find it for free or absurdly cheap, too; gotta love the public domain.

“I may have said somewhere in this chronicle that I am too imaginative to be a really courageous man, but that I have an overpowering fear of seeming afraid. This was the power which now carried me onwards.” -Ed Malone, The Lost World, pg. 179