We’ve almost reached the end of my series of excessive over-analysis of the film Easy A! If you’re confused, click for Part I, Part II, Part III, Part IV, Part V, or Part VI.

So far in this series, I’ve spent a lot of time talking about Olive’s life at school. This makes sense, because it’s where she spends most of her time and also where the majority of the story takes place, but there’s another, very important piece to this puzzle: Olive comes from what may very well be the most well-adjusted yet deliciously quirky household of all time. Her parents, Dill (Stanley Tucci) and Rosemary (Patricia Clarkson), spend the entire movie alternating between absurd hilarity and profoundly supportive insight. In fact, it’s Rosemary who gives Olive the reassurance to finally resolve her situation–and also embodies the film’s thesis statement.

From the outset of the film, Dill and Rosemary offer nothing but open and accepting support. While they often tease and joke around with their two children (there is actually a third child referenced earlier on, but we never see him), every tease comes with a gesture of support or approval. When Olive gets sent to detention for calling another student a twat, her parents express disapproval at the fact that she’s gotten into trouble, but temper it with reassurance that “I’m sure that girl was acting like exactly what you called her.” On the subject of Olive’s new wardrobe, the only comment her mother makes is, “No judgment, but you kind of look like a stripper.” Just after Brandon comes over, the following conversation ensues:

Rosemary: “He seems like a nice kid. He seems a little bit…incredibly gay.”
Olive: “Dyed-in-the-wool homosexual, that boy is.”
Rosemary: “I just want you to know your father and I are totally supportive. We love you no matter what the sexual orientation of your opposite-sex sex partner.”

It seems like a small thing, couched as it is in a joke, but the real message here shines through: no matter what choices Olive makes in her life, her parents love and accept her all the same. Everything from jokes to criticism is attached to a reassurance or show of support. It’s this intensely supportive base that allows Olive to hold on to her identity throughout her experience. Even in her darkest moments, when she begins to hate herself for the situation she’s gotten into, she nevertheless stays grounded and never loses sight of who she really is.

In the end, it’s Rosemary who helps Olive see the way out of her mess, not by offering a solution, but by offering empathy. In what is probably the most emotionally significant scene in the film, after Olive explains the whole mess, Rosemary offers up a revelation: 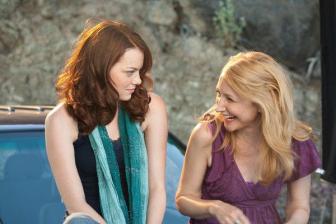 This is a key point to the theme of this movie. All this time, the reason Olive has been such a sympathetic character is because, as I mentioned in Part I, she isn’t actually “a slut”–she’s firmly in the “not guilty” category, so it’s easy to understand that she isn’t deserving of the treatment she receives. But that set-up necessarily begs the question: would she deserve it if she were actually sleeping around? The answer is, of course, no, and Rosemary is the evidence. Rosemary was a slut; she uses the word specifically. But by the time this revelation comes, we already know and love her, as a person, as a mother, as a wife–all of the things “sluts” aren’t suppose to be. She’s smart and funny and loving and kind, and she did not deserve the treatment she got any more than Olive does, but it all turned out okay in the end. This is the film firmly rejecting the notion that sexual promiscuity is in any way linked to character or morality or future life potential. Regardless of their sexual histories, Rosemary and Olive are both fully realized human beings deserving of the same respect afforded to anyone else.

And, of course, Rosemary can’t let the conversation end without showing that same, unwavering support:

Olive: “Can’t you not see that I’m a mess?”
Rosemary: “No, you’re not, Olive. You’re wonderful. And you’ll handle this the same way I did: with an incontrovertible sense of humor. But, you’re much smarter than I am, so you’ll come out of this much better than I did.”
Olive: “Thank you, mom.”

Considering how well Rosemary came out of her own situation, that’s pretty reassuring. A++ parenting right here.

Tomorrow is the last day of Easy A! I’m sure you’re all sick of hearing me talk about it by now and can’t wait to get on to something else. See you tomorrow for the thrilling conclusion!

“And don’t worry about not making us grandparents. Although we were kind of hoping you’d get knocked up, so we’d have a second shot at raising kids. Really do it right this time.” -Rosemary

3 thoughts on “Easy A: A Study in Slut-Shaming, Part VII: Rosemary”