Hello again, fine gentle folk of the Internet! Once again, staring desperately at my DVD collection in search of post ideas has enabled me to scrape together a list of awesome movies! This time around, we’re gunna get all meta and shit. “Meta” meaning, of course, movies that are aware that they are movies, and/or are, in fact, commentating on the very nature of (in this case) film and television. I love meta. Meta is the best. So let’s talk about some meta movies.

I am starting here not because I think Inception is the best film on the list, but because I suspect it is the one most people will jump to once you explain what “meta” means. There is a lot of flash going on in this film, but it is, at its heart, a movie about movies and their dreamlike quality. The way the teams for creating dreams are constructed parallels the teams required to make a movie (a writer, a director, a set designer, actors, etc.), and the way that DiCaprio’s character talks about cut-scenes and non-linear chronology in dreams also applies to film. Movies require their audiences to accept un-realities that they would challenge in real life, which gives them a dream-like quality; to experience a movie, you have to let go of your rules for how life works (theoretically, anyway; some people think that life and movies ought to reflect one another, but that’s a post for another time). Lots of people smarter than me have analyzed this all to pieces, so if you’re interested, definitely look into it. The parallels are there, even if it wasn’t director Christopher Nolan’s intention:

I didn’t intend to make a film about filmmaking, but it’s clear that I gravitated toward the creative process that I know. The way the team works is very analogous to the way the film itself was made. I can’t say that was intentional, but it’s very clearly there. I think that’s just the result of me trying to be very tactile and sincere in my portrayal of that creative process. 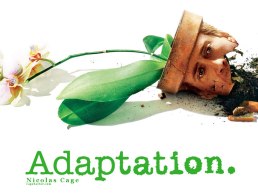 While Inception is about the movie-making process, Adaptation is, as you might suspect from the title, about the movie writing/adaptation process. That’s not all it is, of course–it’s also a pretty harrowing commentary on the animalism of humans and the fragility of our psyches–but that’s really the heart of it. Adaptation is an adaptation of Susan Orlean’s The Orchid Thief (which I haven’t read but recently purchased, so you may be hearing about this again once I’ve had a chance to get to it), which is a character study piece about a man who steals endangered orchids from wildlife reserves in order to smoke them. It is a true story. The main character in Adaptation is a screenwriter,  Charlie Kaufman (the actual name of the screenplay’s author), played by Nicholas Cage, who has been charged with adapting this book into a film and has a great deal of trouble connecting with it, because he feels its author did not reveal the whole story. Charlie also has an identical twin brother who represents all of his personal failings, and ultimately the two of them end up way too involved with Susan (played by Meryl Streep) and her fucked-up life. I don’t want to give anything away so I’m going to stop there, but if you’ve ever wondered how insane the process of writing a movie can make you feel, watch this movie. It’s so meta I’m surprised it doesn’t collapse under the weight of it all.

Nowadays, most people are familiar with the concept of “breaking the 4th wall,” where a character in the film or TV show talks directly to the audience about what is happening on screen. It’s been used to great effect in many different settings (the TV show Malcolm in the Middle comes immediately to mind), but Ferris Bueller’s Day Off was one of the first–and remains one of the best. What sets the 4th wall shattering in this particular film apart is that the commentary Ferris offers isn’t just his inner monologue; instead, Ferris analyzes the story as it unfolds, explicitly highlighting the thematic beats all along the way. He pays particular attention to Cameron and his slow journey of self-discovery, which is the real emotional center of the film. It might be named after Ferris, but Cameron is the protagonist; he’s the one who has to come into his own at the end of the story. Interestingly, this dynamic has lead some people to suggest a cool re-watch of the film, wherein you imagine Ferris to be a figment of Cameron’s imagination. If you watch the movie with this idea in mind, it takes on whole new levels of weird and existential. 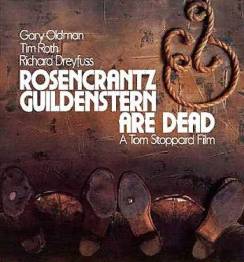 And while we’re on the subject of secondary characters taking over a story, we have to talk about this film. Well, actually it’s originally a play, but the film adaptation is pretty much true to the stage play, so it’s the same effect. Rosencrantz & Guildenstern Are Dead takes two super minor characters from the play Hamlet, Rosencrantz and Guildenstern, and follows them as they struggle to define themselves as separate from both one another and from a world that sees them as secondary. And I don’t mean that in a “oh, woe, no one pays attention to me” way, but rather in a “man, I keep getting this weird feeling that when Hamlet isn’t next to me I stop existing” kind of way. It is basically a meditation on what happens to characters when they aren’t in scene. The film is also highly existentialist, and talks a lot about the nature of storytelling, particularly as it relates to acting–pretending that something is real when everyone involved knows perfectly well that it isn’t. Plus, the thing is chock full of fantastic word play, which is always a plus in my book.

You didn’t really think I was going to make a list of meta movies and forget this one, did you? The Truman Show was my introduction to the concept of “meta,” though I didn’t know the word for it yet. The entire premise of this film–that a man’s entire life could be broadcast and devoured by the public to the point where they forget their own lives, without his ever knowing he’s on camera–is quite frankly genius. At the outset, you believe the world that Truman lives in to be real, because you always accept the “reality” of a movie when it starts. But as Truman begins to notice the incongruities in his life and figure out what is going on, we the audience become increasingly aware of our role in the story: we are all those millions of people watching Truman without his knowledge. Even as we are horrified by his revelations, we are participating in the activity that created his world. This film is as much about the nature of an audience as it is about the invasion of Truman’s privacy.

There you go. Five movies that are meta as fuck. I hope I’ve piqued your interest in seeing at least one of them, and if you know of one that I didn’t mention, leave it in the comments! As always, I love a good recommendation.

“We’re not people! We’re actors! We’re the opposite of people!” -The Player, Rosencrantz & Guildenstern Are Dead