Welp, it’s awards season, and that means only one thing here on Whoosh: Oscar short film reviews! This week you’re getting the live-action, and next week (which is actually going to be after the Oscars air because I didn’t get my shit together much in advance this year) you’ll get the animated.

If you’re in the Seattle area and want to see these films for yourself, they’re playing at Seven Gables theater in the U District for the rest of this week. And possibly beyond, though they haven’t posted their schedule that far out yet.

Parvaneh, a young Afghan transplant left alone in the Swiss Alps, runs into some trouble trying to wire money home for her sick father. She enlists the help of a Swiss teenager she meets on the street, and the two strike up a unique friendship over the course of a drama-filled evening.

Parvaneh started out really slow, to the point where I was bored with it about a minute and a half in. Lots of long, uncompelling shots of nothing happening in dramatic lighting. Once Parvaneh made it to Zurich, though, the story picked right up and turned into an insightful meditation on the place of young girls in the world, and how they can seek and find companionship in each other even across cultural barriers. Plus, both actresses were absolutely darling; I found myself wanting to jump into the movie just to befriend them.

This film takes the idea of a film being a snapshot of life super literally. The whole film is shot from the camera of an itinerant photographer as he arranges Tibetan villagers in front of backdrops of famous monuments, presumably so they can pretend to have visited those places. Each family group is on screen for only the amount of time it takes the photographer to set up their photo, complete with props and costume changes. All you know about the people is what they say during those few minutes.

Despite the spareness of the information presented, La Lampe manages to capture something deeply human in this strange (and very real) custom. Though most of them aren’t even speaking, you find yourself reading stories in the faces of each person, patching together a whole world from these tiny glimpses. It’s a film concept that couldn’t be stretched much further–if it were a minute longer, it would have worn thin–but as it is, this is a lovely, well-executed little film. Thoroughly fun to watch.

Man, is this film intense. The Phone Call sits right up close and personal with Heather, an operator for a crisis hotline, as she tries to talk a man who’s already committed suicide via overdose into letting her call an ambulance for him. It’s a premise cherry-picked for tear-jerking, well-executed, with particular accolades to the actress, Sally Hawkins. Spot on performance.

As much as I appreciate this film, though, I think it squandered its own potential by trying to put a nice, happy cap on the end of what is, essentially, a very dark meditation on what it means to be alive. Everything gets wrapped up neatly in this obvious bid to create catharsis where I think strain would have been the better choice. As is, the ending is way too easy, and I felt like it was a betrayal of the whole premise.

Aya, a random lady waiting at the airport, winds up holding a driver’s clipboard and ultimately picks up and drives his client, Danish pianist Mr. Overby, into Jerulasem entirely on a whim. Throughout the incredibly awkward car ride, the two strangers connect on an intimately intellectual level, and then part ways. The key words there are “incredibly awkward”–this film was so awkward I had to look away from the screen a few times just to get a break from the discomfort.

I can’t decide how I feel about this film. It’s certainly fun to watch these two very different people bounce off one another, and just because something is awkward to watch doesn’t make it unworthy. A little awkwardness can be good, sometimes. My main issue with this film, though, is Aya herself. The film is essentially a character study of her, but she’s just not believable as a person. She operates entirely on whims, appears in the life of Mr. Overby to shake him up, and then waltzes back to her own life, which we know nothing about by the end of the film. She’s basically a manic pixie dream girl without the romantic subplot. 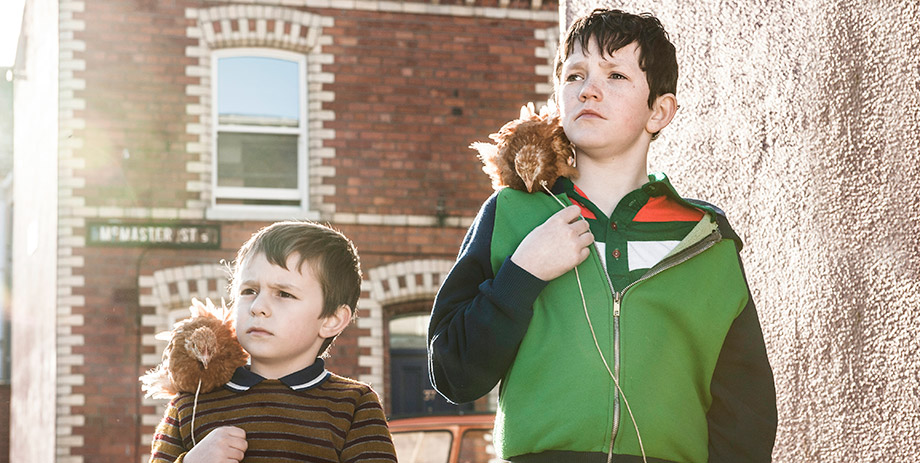 It seems like every year there’s at least one live-action comedy film centered around a quirky family. This year, that movie is Boogaloo and Graham, which chronicles the tale of two boys and their pet chickens. The chickens were a gift from their soft-hearted father, but mom is entirely opposed to them, and a bit of a war breaks out over their continued presence. It’s a cutesy little film about kids and their pets, and family love, and also there’s a weird subplot about soldiers storming the streets of Belfast because it’s set during the height of the Troubles. I guess that was just for historical accuracy or something, because it had almost no bearing on the plot, aside from weirdly interrupting it that one time.

This was a cute little film, but that’s about all I have to say about it. Nothing to write home about. Just a couple of boys and their chickens, fighting the good fight against mothers and their weird insistence on sanitary conditions in their houses.

Yours on the silver screen,
M.M. Jordahl

“If you want a happy ending, that depends, of course, on where you stop your story.” -Orson Welles