For those of you who don’t follow me on tumblr, there’s a web series you should be watching. It is called The Lizzie Bennet Diaries, and it is a modern adaptation of Jane Austen’s Price and Prejudice, and it’s one of the best things currently happening both on the Internet and in the world of innovative storytelling and transmedia. My name is Morgan Jordahl, and we’re going to talk about Lizzie Bennet. 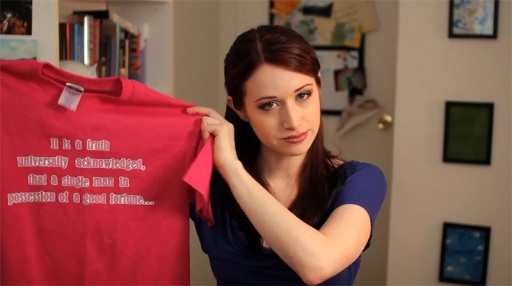 Now before you say anything, yes, I know that Jane Austen is not exactly universally adored material. Her stories are basically the Victorian era equivalent of sit coms, and Pride and Prejudice is actually the world’s first romantic comedy (not that there’s anything wrong with romantic comedies). Believe me–I’m right there with you. Not a big Austen fan. I avoid her books like the plague.

But the Lizzie Bennet Diaries don’t require that you be an Austen fan. In fact, much of its fanbase hasn’t even read the book. While remaining pretty faithful to the original plot, the series transcends the source material, elaborating and building upon it to create a multi-layered, inter-textual master study in three dimensional characters and the storytelling opportunities presented by new media. If you’re after strong female characters (who don’t wield guns), or the future of television production, Lizzie Bennet is your golden ticket.

The Lizzie Bennet Diaries operates in a vlogging format, with the main character, Lizzie Bennet, talking to her camera as part of her thesis project for her Masters in Communications. She is assisted by her best friend Charlotte Lu, who does all of the editing and promotion. Lizzie’s two sisters (in the book it’s four, but the cast was cut down for practical reasons), Jane and Lydia, are both prominently featured as well, and all four of these ladies get full story arcs. All four of them. For a show that only exists in 2-5 minute installments, the Lizzie Bennet Diaries does an incredible job of making sure even small side characters exist as fully-realized people inside the world they inhabit (helped along by the incredible acting of their improbably gorgeous cast). Even minor characters, like cousin Mary or Mr. Collins, are given their own goals and reasons for acting, so it never feels like anyone exists solely to push the plot forward. Everything grows organically from the characters.

But the truly impressive thing is not the writing, but the format in which it exists. Like I said, the main portion of the Lizzie Bennet Diaries is Lizzie’s vlogs (of which there are 86, as of this posting, so it’s a good chunk of time). But to fully experience it, you have to dig a little deeper. In addition to Lizzie’s videos, the show also offers vlog channels for her sister Lydia, Charlotte’s younger sister Maria, and, now, William Darcy’s younger sister Gigi. These additional vlogs aren’t necessary to the basic storyline–you can get that from just Lizzie–but they show you what other characters are up to, and give you a perspective on the story that isn’t colored by Lizzie and her inherent prejudice.

And if you’re really into the story, like I am, you also have the option of following the characters on their various social media accounts. Yup–all of them. Lizzie, Jane, Lydia, Charlotte, Maria, Bing Lee, Caroline, Darcy, Gigi, Mr. Collins, George Wickham, Fitz, and Mary all have twitter accounts. Even Lydia’s cat has a twitter account. Most of them also have tumblrs and facebook profiles. You can stalk them across all these various media platforms and find out what’s going on in their lives, even when Lizzie isn’t paying attention to them. This also means that the story is happening in real time, so you get to experience it at the same time the characters do–and you can even find out major plot points before Lizzie does. If it exists in-universe, you can bet the transmedia team made it exist in our world, too.

Now, I’m not saying the Lizzie Bennet Diaries are perfect. It’s a whole new approach to storytelling, so of course there are going to be some hiccups. For example, most of the characters’ twitter feeds are completely dead when those characters aren’t currently active in the story–something that would be easy to remedy, and would contribute to the realness of the story, if they paid enough attention to it. Plus, the vlogs sometimes include content that would never make it to the Internet in real life, because of its personal and private nature. But for how innovative the use of media is, this particular show is very well thought-out and carefully executed, and allows for fan engagement on a level hitherto unknown. You should see the essays people write about it on tumblr, which often include commentary from the show creators themselves.

In short, if you’re at all interested in new media, or if you just like stories where the female characters don’t suck, you should be watching the Lizzie Bennet Diaries. It’s not too late–we’re just getting to the really juicy part!

“Well, Mr. Darcy, it’s safe to say that I like you even less than you like me.” -Lizzie Bennet

P.S. To watch the Lizzie Bennet Diaries, you can use the official storyline, which includes twitter conversations, or this handy fan-made youtube playlist, which features all of Lizzie, Lydia, Maria and Gigi’s videos in order, as well as a couple from Ricky Collins’ company Collins & Collins (because world building).

4 thoughts on “Transmedia and The Lizzie Bennet Diaries”