When I was writing Friday’s post, I started to notice a trend in the movies I was pointing out: more than half of them were based on classic works. The more I thought about it, the more examples I was able to come up with, which lead me to this post. Here are a few movies that you might not have realized were based on a classic work. Most of them are rom coms, so add that to the list of reasons people need to stop ignoring rom coms.

1. Easy A – The Scarlet Letter

I won’t talk long about this one, since I wrote eight entire posts about it a couple weeks back, but it’s a pretty obvious example. In Nathaniel Hawthorne’s The Scarlet Letter, Hester Prinn has an affair with a minister, and then has her reputation besmirched and gets shamed all over town for daring to act on her sexual desires, with her ultimate punishment coming in the form of a red A on her wardrobe. In Easy A, Olive mistakenly starts a rumor about her own sexual escapades, and her subsequent flaunting of her sexuality by adding a red A to her wardrobe turns her into a social pariah. This is a pretty loose adaptation, but the basic elements are all there, and Easy A is definitely offering up a modern commentary on the themes of The Scarlet Letter. Again, if you want to read more about Easy A, I wrote like a million things about it.

This is actually one that I did not know about until a friend of a friend pointed it out after Friday’s post, probably because I haven’t read Emma and didn’t make the connection. However, wikipedia tells me that in Jane Austen’s Emma, the young, beautiful, witty and highly privileged Emma develops a taste for matchmaking, and tries to set up her young friend Harriet with the local vicar, Elton–who instead falls for her. Then Emma falls for a handsome newcomer to the neighborhood, but ultimately realizes the person she’s in love with is her long-time next door neighbor, Mr. Knightly. A bunch of other matchmaking also happens, but you get the idea.

Clueless is an exact parallel of this plot. The young, beautiful, witty and privileged Cher gets a taste for matchmaking and tries to pair up new girl Tai with popular boy Elton (he’s literally called Elton)–a plan that goes awry when Elton tries to get together with Cher instead. Then Cher develops a crush on sexy newcomer Christian, who turns out to be gay, but it’s alright because ultimately she falls for her ex-step brother Josh. Again, a bunch of other matchmaking also happens; entire scenes in this film are modeled on Emma, complete with one where Josh/Mr. Knightly asks Tai/Harriet to dance after she has been spurned by Elton and his haughty new girlfriend/wife. Now, while it’s true that most romantic comedies are modeled on the Pride and Prejudice structure (girl meets boy –> girl hates boy –> boy turns out to be not such a douche –> love forever), Bridget Jones’ Diary is an exact replica of Elizabeth Bennet’s story line. Bridget falls for the handsome and charming Daniel Cleaver, he sells her a bullshit story that makes her hate Mark Darcy (get it? Darcy), but then in the end it turns out that actually Daniel ran off with Mark’s fiance way back when, and actually Mark is the preferred love interest, even though he’s awkward as all get out. And the whole story is told from Bridget’s perspective.

However, this adaptation leaves out a ton of other story elements–especially the drama with Jane and Bingley, and Lydia’s entire plot line. While Bridget does have an overbearing mother who wants her to get married, her family is practically non-existent in the film, and her friends exist only as a peanut gallery. Which is why, if you want a truer modern adaptation, you should watch the Lizzie Bennet Diaries. It’s all on youtube and it is free to watch, so you literally have no excuse (also I have written about it before because I love it to pieces). This adaptation takes a much more comprehensive view on Elizabeth’s life, giving her relationships with her sisters and Charlotte plenty of time to breathe and develop rather than focusing entirely on the romantic entanglements. Plus, there is some genius updating going on, where a literal translation was passed over in favor of a thematic one–something that gives me such happy writerly feels that I may write a post about it sometime, who knows.

For all its light-hearted gaiety, the Taming of the Shrew is actually kind of an awful play, from a feminist perspective. The basic premise is that women who are strong and independent need to be broken in, and then they will be the most submissive and obedient of wives because they’re so grateful that you went to the trouble of wooing them. The story follows two dudes, Lucentio and Hortensio, who both want to marry the young & attractive Bianca Minola. However, Bianca’s father has declared that she shall not marry until her older sister Katherina, who has a hot temper and a quick tongue, marries first. The men hatch a scheme to marry Katherina off, and ultimately convince her to marry Petruchio, who uses reverse psychology to win her heart. Then all of Bianca’s suitors are free to vie for her hand while Katherina is essentially psychologically tortured by her new husband. Yay, Shakespeare!

Thankfully, the modern adaptation, 10 Things I Hate About You, is much kinder to its female heroines and actually gives them agency in their romantic lives. Bianca is not allowed to date until Kat dates, just like in the play, and Patrick has to win Kat over, just like in the play, but it isn’t done through psychological torture and deceit. Instead, communication and genuine compatibility sees them through. But while the women-as-prizes theme gets thoroughly gutted, the movie is still super true to the source material in a number of ways. For example, Cameron pretends to be a French tutor in order to get close to Bianca without breaking the “no dating” rule, just like Lucentio disguises himself as a Latin tutor in the Shakespeare play. In fact, the film even quotes Shakespeare, with Kat’s friend remarking that Kat “hates [Patrick] with the fire of a thousand suns.” Nice. It’s possible you already knew about this one, but I had to include it because it’s one of those things that really blows your mind the first time you realize it. The Lion King is one of the first Disney movies that wasn’t a direct adaptation of a folk/fairy tale, so a lot of people mark it an original and don’t think about it any further. But that would be a mistake, because The Lion King is just Hamlet with animals, minus the body count. Hamlet/Simba is a brash young prince, set to inherit the kingdom from his father Hamlet Sr./Mufasa, until his uncle Claudius/Scar kills his father and takes over the throne. Hamlet/Simba initially believes his uncle to be innocent, but has to work out what happened with help from his friends, Rosencrantz/Timon and Guildenstern/Pumba. Also the king has a well-meaning but ultimately incredibly stupid adviser who loves to hear himself talk–Polonius/Zazu. There’s even a scene in The Lion King where Simba talks to the ghost of his father, like the one that opens Hamlet. Of course, the parallels aren’t perfect, because you couldn’t make a children’s film that actually followed the trajectory of Hamlet‘s plot while keeping it G-rated, but the relationship is obvious once you’ve noticed it.

Of course, I can’t talk about Hamlet adaptations without mentioning one of my favorite films of all time, even though it totally doesn’t belong on this list, so…also you should watch Rosencrantz and Guildenstern are Dead because it’s amazing and hilarious and really smart. Okay, enough about that, but not about The Lion King because…

Yup. Disney even copied a Shakespeare play with the sequel. Of course, Romeo and Juliet is pretty much the most widely adapted story of all time–even Shakespeare’s version was an adaptation–but nevertheless I think it’s funny to note that even the sequel to The Lion King is a Shakespeare adaptation. You have Simba’s daughter, Kiara, falling in love with Scar’s son, Kivu, but they are forbidden from being together because of the friction between the two prides over Mufasa’s murder (never mind that they are second cousins–it’s only the rivalry keeping them apart, duh). Really, any story with star-crossed lovers from opposite sides of a feud is a Romeo and Juliet adaptation (*coughWestSideStorycough*), but The Lion King 2 even goes so far as to have Kivu’s brother killed while fighting for his family’s honor against Simba’s pride–kinda like Romeo’s friend Mercutio and Juliet’s cousin Tybalt. But of course, since it’s a children’s film, the story ends with peaceful reconciliation and a much lower body count (3, instead of Shakespeare’s 4). 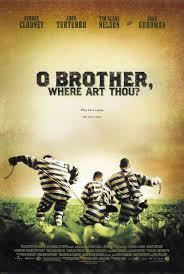 Finally, bringing up the rear, we have the most glaring example that people seem to overlook anyway. O Brother, Where Art Thou? follows inmates Ulysses Everett McGill (George Clooney), Pete Hogwallop (John Turturro) and Delmar O’Donnell (Tim Blake Nelson) as they trek across the WWII-era American South in search of treasure Everett says he can find–though his real goal is to return home before his wife, Penny, remarries. The Odyssey follows the tale of Odysseus (thus the name) as he struggles to return home from the Trojan War after being held hostage by the sea-nymph Calypso; he must reach his wife, Penelope, who is being pursued by 108 suitors. From there, the parallels just run rampant. They meet a blind bard, are lured to sleep with food before their encounter with the cyclops (played by John Goodman with an eye patch in O Brother, Where Art Thou?), fall foul of Sirens, get caught in a flood, etc., and all along they are constantly pursued by an asshole who may or may not have magical powers (in the Odyssey, this is mostly Poseidon, although pretty much the entire Greek pantheon gets involved at one point or another). One of the characters even appears to die, but is then discovered to not actually be dead–an homage to the part where Odysseus goes to the underworld and talks to the dead. The chronologies don’t line up perfectly (or at all, really), but most of the elements of the Odyssey are present. Also O Brother, Where Art Thou? has a fantastic soundtrack, which has nothing to do with the Odyssey but I feel compelled to mention it anyway.

And there you have it–7 films you may not have realized were adaptations. Can you think of any more? Definitely tell me, because I can’t think of any more and I love things like this. I want to know about it if you know of any others. Seriously. Please tell me.

Yours in parallel,
M.M. Jordahl

“Believe me, Delmar, woman is the most fiendish instrument of torture ever devised to bedevil the days of man.” -Ulysses Everett McGill, O Brother, Where Art Thou?

6 thoughts on “Movies You Didn’t Know Were Adaptations”