I was on tumblr just now, as per usual, and a post featuring the Disney song “Gaston” happened to scroll by. I didn’t even listen to it, but such is the insidiousness of Disney music that it’s been stuck in my head for the past hour and a half, and in my unwilling contemplation of the lyrics, I’ve come to a not-startling-at-all conclusion: Disney sucks for boys, too.

I feel compelled to write this because people spend so much time highlighting what, exactly, it is that makes Disney dangerous to the mindsets of little girls, including my stunningly intelligent friend Anne, to the point where I even felt a need to defend some of those Disney Princesses. And that’s definitely a point that needs to be made, but you almost never see the other side of the story. What the hell kind of message is Disney sending to little boys?

Beauty and the Beast starts out on a pretty humiliating note for Gaston, which is what prompts the song that prompted this post. Looking at it from Gaston’s perspective, basically what happens is that he makes overtures toward a lady he likes, and she rejects him. Yes, he was totally acting entitled and being a douche and he absolutely had it coming, but that doesn’t mean the rejection wasn’t wounding. Rejection sucks, and Gaston reacts in a way that is totally recognizable as human:

Gaston: No one says “no” to Gaston! Dismissed! Rejected! Publicly humiliated! Why, it’s more than I can bear.
LeFou: More beer?
Gaston: What for? Nothing helps. I’m disgraced.

And how does his friend react to the news that he’s so depressed he doesn’t even want beer?

LeFou: Who, you? Never! Gaston, you’ve got to pull yourself together.

…by telling him to snap out of it. God forbid a man should express actual feelings, right? Thanks, Disney! That’s a healthy message.

LeFou goes on in the song to describe all of Gaston’s winning characteristics, all of which are firmly in the “man’s man” category of behaviors. You know: the things all other media everywhere is telling little boys they should be. Observe:

“Every guy here’d love to be you, Gaston, even when taking your lumps.” 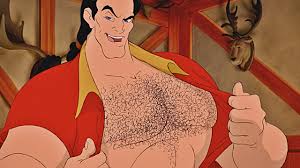 Chorus: For there’s no one as burly and brawny.
Gaston: As you see I’ve got biceps to spare.
LeFou: Not a bit of him’s scraggly or scrawny….
Gaston: That’s right! And every last inch of me’s covered with hair!

I use antlers in all of my decorating!

Aaaand engages in questionably homo-erotic behavior, despite his insistence on a rigidly hetero sexual identity:

Aaaaand he has all of his villainous traits in common with the story’s protagonist, Beast:

And maintains questionably homo-erotic relationships, because I’m just saying, there were not a lot of ladies in that castle….

Basically the only difference between the two of them is that one of them kidnaps Belle’s father, and the guy who did that wasn’t the villain. But he still got the girl, I guess because he had a library? The actual justification for Belle & Beast’s relationship is never clear, but it sure as hell wasn’t because he was a better man than Gaston. Because he wasn’t. But he could read, so I guess Disney wants little boys to learn to read? Is this actually a movie about how being nerdy gets you chicks? I am way off the subject now…

Anyway, the question is this: which is it? Should boys be manly and tough and stand up for what they believe in  like Gaston, or should they be manly and tough and occasionally read some books  like the Beast? Is manliness good or bad? Because the line between the two is almost non-existent, both are caricatures of what it means to be “manly,” and neither of them do what they should actually do, which is allow Belle to make her own life decisions like a regular human being. Basically Disney has set up two almost identical characters as protagonist and antagonist in this movie, and the only difference between them is that one was more successful at forcing Belle to spend time with him. So. Yeah. Good work, Disney. Spot on.

“I’m especially good at expectorating!” -Gaston, Beauty and the Beast

8 thoughts on “A Close Reading of Gaston; or, Why Disney Also Sucks for Boys”