I’ve done this before, so it should come as no surprise that I am kind of an online content nut. There is a lot of awesome stuff on YouTube, and I think I’m subscribed to, like…most of it. Seriously, I watch a lot of online TV. It’s a little bit out of control. And since I can’t think of anything else to talk about today, I’m going to recommend some of my favorite series. This time, we’re all about the educational, bitchessss. Let’s learn. 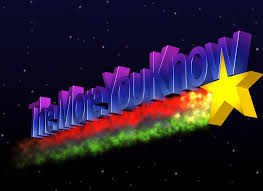 For this particular list, each topic name will be a link to the main YouTube channel for the series, and underneath it will be one of my personal favorite videos from the series. Enjoy.

Crash Course is an online education series started and starred-in by the brothers Green (of vlogbrothers fame). The channel is broken up into playlists, each with a different topic, and each topic gets a multi-week run to air its content, much like lectures in a college class. John Green covers the humanities, while Hank does science. So far, the series has covered World History, American Lit, American History (ongoing), Biology, Ecology, and Chemistry (ongoing). Videos are usually somewhere between 9 and 15 minutes long, depending on the density of the subject.

What I love about Crash Course is the light-hearted style. Too often, ‘educational content’ comes out dry and unengaging, which can make it hard to keep paying attention even when the subject is intensely interesting. With a combination of running gags, sarcastic asides, and hilariously literal animated cartoon re-enactments, Crash Course achieves a level of hilarity previously unknown in educational content. I have had full-on laughter meltdowns watching this series. It’s also a great resource if you’re in school and looking for a user-friendly overview of the subject you’re studying.

Crash Course is also part of subbable, so if you like it, you can support the show with regular donations.

While Crash Course is super structured, Stuff Mom Never Told You is much more laid-back. The host, Cristen Conger, covers a wide range of topics, with a loose focus on gender and feminism. She responds to pop culture and news, explains the history of things like skirts and make-up, and does a really cute series called “Herstory,” in which she tells the stories of fascinating women throughout history. There’s also a regular segment with her boyfriend, whom she calls Professor Boyfriend on the show, where they explore a question–usually related to gender–and discuss different perspectives on it. She also uses a lot of costume theater, which is kind of hilarious and adorable.

Stuff Mom Never Told You is really great as a jumping-off point for thinking about things. It does offer hard facts, but the videos always end on a question, with encouragement to think about it more and come to your own conclusions.

Laci Green is one of my very favorite online personalities. She’s a sex educator dedicated to dispelling harmful myths about sex, gender and queer identities, and she’s absolutely hilarious. The best thing about Laci is that while her information is always well-researched and clearly explained, she does it in a way that’s entertaining as hell. Watching one of Laci’s videos is like having a conversation with that one cool girl who lives just down the dorm hallway from you, who likes to force free condoms on anybody who stops by to visit her, “just in case.” Her enthusiasm is infectious, and her information is top-knotch; she’s also a sex educator who does talks at universities all across the country, spreading the gospel of self-love and safe sex. Basically, Laci is the greatest.

If you have an afternoon to waste, this is the channel for you. Vsauce is like a rabbit hole of endlessly fascinating videos about questions you’ve never thought to ask. Once you start watching them, you just keep clicking for more. Video topics range from the scientific (What if the sun disappeared?) or psychological (Why do we play games?), to the absurd (Why did the chicken cross the road?), and all of them take you places you wouldn’t expect. The host of the show, Michael, has a way of twisting the progression of an idea that’s almost impossible to follow, yet always seems to end up at a satisfying conclusion. He also likes to take things to the extreme, going to great lengths to find every conceivable version of the truth, no matter how weird, which I appreciate. Once you’ve finished watching the video (usually about 10 minutes), the description for it is absolutely packed with links, so you can literally read for hours after each one. Like I said–Vsauce is like a rabbit hole for trivia nerds.

There are additional Vsauce channels–Vsauce2 and Vsauce3–but I have yet to delve into either of them, because the main one is quite enough for the moment. There are also some non-educational videos on the Vsauce channel, most of which are from the series LUT, where Michael basically just rounds up a bunch of cool shit that he saw on the Internet that week. I’m not really a fan of those videos, but they seem to have been discontinued in favor of the ones I was talking about above, which is just fine by me.

Everybody knows that the Internet is a great resource for learning, not least of all when it comes to those mundane tasks that you’re too embarrassed to ask somebody else to teach you. Most people just use websites like wikihow or ehow, but personally I prefer video tutorials. How To Basic is kind of a catch-all channel for these types of tutorials, with topics ranging from how to make meatballs to how to twerk like Miley Cyrus. No, really. You’re welcome.

“Education is a progressive discovery of our own ignorance.” -Will Durant

6 thoughts on “Learning is Magic”