Those of you (all 5 of you or whatever) who follow me on twitter already know this, but I recently read The Princess Bride, the book, which preceded the film, and it made me about twenty different varieties of pissed off. If I could go back in time and erase not only my memory of reading the book, but also my knowledge that this book even exists, I would do so with insane, unbridled glee. And the sad part is that the actual princess bride part of the story–the bits with Westley and Buttercup and Fezzik and Inigo–are all there and just as delightful as ever, but then it all just gets ruined by the meta. A story ruined by meta! I never thought I would see the day that I didn’t like an attempt at meta, but holy shit does this one suck. 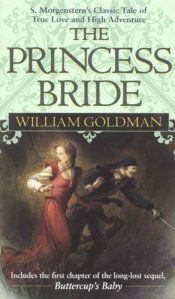 Okay. Let’s talk about it.

First things first: I love The Princess Bride film. Most people do, although I do think some of its appeal is nostalgic in nature, and you have to see it within the correct time frame of your childhood to be able to fully appreciate it. So know that I went into this book fully expecting to enjoy it, as most source material books build on the films they inspire, and gaining that extra insight into a character’s origin is pretty much my favorite thing.

So imagine my surprise when I open The Princess Bride book and am met with 33 pages of navel-gazing prose in which “William Goldman” reminisces about his kindergarten days of really liking sports, then having this book read to him by his father, then going on to become even more of an asshole who wants to cheat on his wife and calls his son fat at the dinner table. 33 pages of slogging through this douchebag’s inner monologue is enough to make anyone want to stab their ears out, so it’s a welcome relief when he finally gets to the part where he’s “annotating” a book written by S. Morgenstern, and you finally get to read something that isn’t happening inside this douche nozzle’s head.

At this point, I should make it clear that S. Morgenstern is not a real person, he did not write The Princess Bride, and William Goldman was not merely annotating here. He wrote the whole book. Even the fictionalized version of his own life. Just so we’re clear. All of this is him. He intended the douche prose to be part of the reader experience, and he made up that version of himself to force readers to slog through.

So you’ve finally escaped the self-congratulatory ramblings of the fictional William Goldman, and gotten to the part that’s actually interesting and fun to read–the part with Buttercup and Westley and all the rest of the lovable crew. Their section of the book is delightful, and you get to enjoy them for a whole six and a half pages before fuck nugget sticks his head in again to tell you about all the bits that he cut from the “original,” and to point out how weird all the parenthetical asides are, but that you should just accept them because they’re meant to demonstrate that the story is taking place in a world removed from our world, although Forin is a real country (Forin isn’t a real country, but it is in the world fake-ass William Goldman lives in). This aside lasts for a whole page.

There is very little that I hate more in writing than authorial attempts to tell you what you should think about the story you are reading. I will let authors get away with a lot–bad prose, clunky characterizations, lackadaisical plots, sexism, racism, etc.–in an effort to understand and try to enjoy a story on its own merits, before stepping back and looking at the larger context of it. Those things are all well worth complaining about and discussing, but they ultimately aren’t deal breakers. However, the second an author pops in to make sure I am viewing the story exactly the way he/she wants me to, I see red in an instant and want to hurl the book across the room. Those of you who have been reading this blog long enough may remember that this was one of my main complaints about Super Sad True Love Story. Write what you like, but do not tell me how to feel or what to think when I am reading it.

So Goldman’s italicized asides pissed me off almost instantly–a situation that was not improved by the fact that the asides added literally nothing to the experience of reading the story. Mostly, they served as a reminder of how much I hated the fake version of Goldman that was pretending to have edited it. Some people may point out that perhaps that was the point–that the story is suppose to force you to grapple with liking a story despite the prattishness of its author–to which I reply BAH HUMBUG. If your meta is getting in the way of me being able to read your book without having rage conniptions every few pages, you have screwed up. Besides which, the asshole isn’t even the person who wrote the good bits of the story within the fake universe of the annotations, so all it’s really saying then is that people who suck can still like things that don’t suck.

Why not just skip the asides and stick with the parts of the story that I liked? Ah, now we get to the really frustrating part. At first, I did do that. After a few dozen pages worth of asides, I began to skip them, but quickly drew short when I realized that skipping the asides meant missing plot points, because some of those asides are literally just summations of shit that got cut. That’s right. Instead of putting the damn scenes into prose, Goldman just lists out what happened and what the thematic and cultural symbolism of those bits was, and what you were suppose to get out of them, and then drops back into the story in a completely different place. In one such aside, he takes the characters from all four of them trapped with no escape while three of them are on the verge of death, to all four happy and safe on a boat with some pirates. No, really. It’s the most deus ex machina bullshit I have ever experienced in my life.

Basically, what you should take away from this incoherent rage sputtering is this: do not read The Princess Bride. Watch it. Watch the genius that is Mel Brooks, and pretend you never found out that a book version exists. The important bits are lifted verbatim anyway (yes, including the accent on “mawwadge”), so you are missing almost nothing by skipping the book (if you want to know what you are missing, look at the bottom of this post in the section that is labeled “SPOILERS” just in case any of you are for some dumbass reason still considering reading this book. Now you don’t have to. You’re welcome). Like Fight Club, this is one of those rare occasions where you should just see the movie and not waste your time reading.

“They’re kissing again. Do we have to read the kissing parts?” –The Princess Bride

Things that were not in the movie:

1. Prince Humperdinck briefly considers marrying a different princess, but decides against it when her fancy hat falls off and he finds out she’s bald
2. Before rescuing Westley, Fezzik and Inigo have to fight their way down through Prince Humperdinck’s Zoo of Death (with Westley in the torture chamber at the bottom). Fezzik kills a huge constrictor snake and Inigo impales a bunch of bats and then they accidentally squish a super venomous spider.
3. Fezzik and Inigo have to quest to collect the items that go into Miracle Max’s magic pill, but the whole quest happens in an aside where Goldman complains that people will think it’s a rip-off of the Wizard of Oz even though it totally came before the Wizard of Oz (hint: it totally didn’t).
4. The book ends with Buttercup, Westley, Fezzik and Inigo fleeing from the castle on four white horses, toward the ocean where they will meet up with Westley’s pirate crew, but two of them are slowly dying and it ends ambiguously, leaving the question open as to whether or not they will escape. Which is actually pretty cool, except then…
5. Under the guise of legal pressure from “the estate of S. Morgenstern,” the first chapter of the long-lost sequel is also explored. This is where they all get trapped and then inexplicably rescued by pirates, and then the pirates somehow magically cure all three dying dudes, and then they escape through a whirlpool to a magic desert island where they can safely hide from the prince. Then Westley and Buttercup get it on, and Buttercup gets pregnant, and then almost dies in childbirth, but then Fezzik gets possessed by some sort of weird midwife spirit and magically saves her and the baby girl, who they name Waverly. But then somehow Waverly gets kidnapped by a faceless magical creature who carries her up a mountain and throws her off, so that Fezzik has to leap off after her and try to break her fall with his own body, and the story ends with him falling. That’s one chapter. I swear to god I am not making this up. It’s like bad fan fiction.

Oh, there’s also a little bit more back story on both Inigo and Fezzik. Basically, Fezzik’s parents forced him into fighting when they found out how strong he was, then they died, leaving him alone, which was his greatest fear. He was also part of a circus for a while but didn’t have any friends (sadface). Inigo’s story is mostly the same as the movie, with the added element of a briefly-mentioned angry Scottish swordsman who forced him to learn to fight blindfolded and on his knees, which is pretty funny.

4 thoughts on “The Princess Bride”