Okay, true facts: I actually watched this movie sober, and thoroughly enjoyed it. It’s a fun, self-aware commentary on the wacky hi-jinks of 50s-nostalgia teen movies (some of which I have drunkenly recommended before), and it is, frankly, delightful. But I am absolutely sure that watching it drunk would make it EVEN BETTER. Though, really, when is that not true? 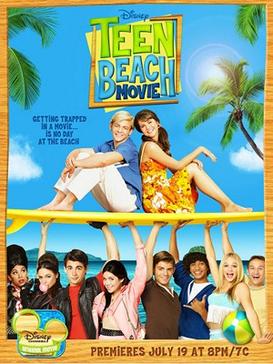 The premise: Brady and McKenzie are two surfing lovebirds whose paradise has just been shattered when McKenzie’s aunt shows up to take her to boarding school on the East Coast. Before her flight out, McKenzie runs off to ride one last monster wave, which ends up transporting both her and Brady into the fictional world of Brady’s favorite movie–a bikers vs. surfers musical rom com from the 50s. Their arrival upsets the predestined plot of the film when they accidentally prevent the star-crossed protagonists, surfer Tanner and biker Lela, from meeting. Brady and McKenzie have to set the film back on track if they have any hope of getting home before they turn into permanent fictional characters.

Why you should watch it:  Genre parody movies are a dime a dozen (Not Another Teen Movie, Scary Movie, etc.), but this one sets itself apart with the sheer volume of meta it dumps into its plot. The musical numbers in particular really commit to this premise; the love ballad is built entirely around Brady and McKenzie trying to get the protagonists to notice each other, and there’s a whole dance sequence dedicated to McKenzie’s horror at discovering her hair no longer gets wet when she falls into the ocean just like a person in a movie. At every turn, this film is intentionally stilted acting, over-wrought drama, and wink-wink-nudge-nudge 80s/50s nostalgia, set to the feel-good pop music Disney channel films do so well. It’s not a bad movie so much as it is a celebration of bad movies, and it makes no apologies.

“I know karate! …and, like, two other Japanese words.” -Brady