After slogging through two books in this shitty fucking series, my thought process regarding it has pretty much been reduced to crazed, maniacal laughter. But I am going to try to use my words, just for you, dear readers. Just. For. You. 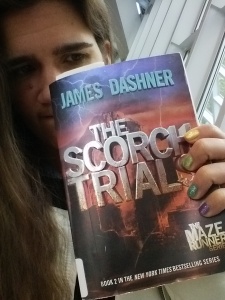 The Book: The Scorch Trials by James Dashner

Genre: YA, scifi, second in a series

First impressions: The downward spiral that was my experience of this series has been exhaustively documented on Twitter, but the long and short of it is that I absolutely and unequivocally hated it, on just about every level. The “plot” seems to have been made up on the fly, working toward no discernible end goal; the main character, Thomas, vacillates wildly between character traits, with the only consistency being that particular blandness characteristic of so many protagonists; the female characters (all two of them) are horrifically flat stereotypes; the prose is boring; the in-world “jargon” is awkward; and 90% of the text is either A) unnecessary re-capping of things that just happened, or B) describes nothing happening at all, repeatedly, ad nauseum. It reads like a first-time NaNoWriMo participant who decided to participate the day of, with no outline, character sketch, or even general world-building notions, and also no previous experience constructing paragraphs. It’s a fucking disaster.

I’d tell you what the plot of The Maze Runner is, but honestly, even after reading two books, I’m not really sure. There’s this evil/good/nebulous organization called WICKED (World In Catastrophe – Killzone Experiment Division, which isn’t contrived at all, nope, not even a little, duh) charged with–I dunno, I guess saving humanity? Curing a disease? Rebuilding civilization?–doing something heroic for the good of all mankind after the world has been destroyed by solar flares and a deadly disease called the Flare that drives people crazy. Their method for saving the world involves wiping a bunch of kids’ memories and putting them in a maze surrounded by vicious mechanical slugs, and then once they escape that maze, making them run across the desert from Mad Max. This is suppose to…reveal patterns? Of some sort? Or find them a Candidate who can survive the Variables and do…I don’t know, it’s really not clear. The thing is, the book really wants you to believe that everything that happens is part of this organization’s vast Plan, but it’s all so random and poorly plotted that those promises get pretty empty after about fifty pages. Remember: I suffered through SEVEN HUNDRED PAGES of this shit and I still have no idea what the point of it is. That should be a GIANT FUCKING RED FLAG.

As an aspiring writer, I am personally offended that this half-assed, unedited, sexist, lazy piece of shit story was not only published, but became a best seller.

Will it adapt?: I hear that the first book did, and that I actually believe. The actual maze portion of the series–the first book–is pretty self-contained and straight forward. All the movie has to do is skip over all of Thomas’ introspection, which is easy enough. The second, though? It’s literally just kids running through a desert, dying dramatically. There’s no forward momentum. There’s no three act structure. There is only Thomas, sucking as hard as he can possibly suck, while dudes praise him and ladies fight over him. It is boring as fuck and it will not adapt and you should under no circumstances contribute money to this godawful franchise.

Should I read it?: Fuck no.

“Why do you even bother asking questions, dude? Nothing has ever made sense and it probably never will.” -Minho, conveniently lampshading the fact that Dashner forgot to write a plot for his four-book series

This post is part of my I Read It First series.