So here is something that might make you not like me: I think Disney Pixar’s film Up is a terrible movie. No, really! It’s a bad film. And not just because its absurdly short name makes it almost impossible to search for online/in a store directory/at movie rental shops (yes, those do still exist, surprisingly enough). And I can back that up, so just hear me out. 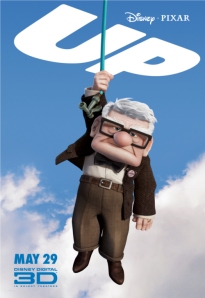 Now I know what you’re going to say. “But, Morgan! That opening sequence! The girl and the boy and the growing old montage and ALL OF THE FEELS!” Rest assured, I am not going to attack your beloved feels. The first eleven and a half minutes of Up are perfect, and had they been offered as a stand-alone short film I would have no problem with it. Seriously. The best cinema has to offer. A++. Four for you, Glen Coco, etc.

But after that, the whole thing goes to shit, and here’s why.

1. Russell is a 2D Character (and also annoying as hell)

For those of you who aren’t incredible story nerds (why are you even reading my blog? Like, really, this is all I talk about), a 2 dimensional character is one that does not grow, change, pursue his/her needs or otherwise behave like an actual human being over the course of a story. 3 dimensional characters do change–they grow and evolve.

It is pretty normal–expected, actually–for the protagonist of the story, in this case Grumpy McGrump Face (I can’t even be bothered to Google his name. That’s how little I care about this movie), to learn a lesson and change. In a quality film, “secondary” characters, or at the very least the other protagonist character, will also evolve and change, making them 3 dimensional. But not in Up.

2. The Villain Has Zero Motivation

If Up were a movie made in the fifties, it might be believable that a rogue explorer, falsely discredited by the scientific community, might resort to actual murder to acquire a living specimen of the animal he was accused of manufacturing. You know. Back before we had things like video cameras and cell phones and GPS tracking devices. And don’t tell me that it’s because he’s been isolated from society for so long that he doesn’t know about those things, because he invented a collar that can make dogs talk. He really couldn’t come up with a method of recording “Kevin” that didn’t involve killing everyone who wandered within a hundred miles of him? What’s more, he couldn’t just stick a tracker on the damn bird and follow it to its nest? We know he has trackers because he PUT THEM IN THE DAMN MAGIC DOG COLLARS. And while we’re on the subject of the dog collars….

3. Seriously, the Dogs. What the Hell.

Don’t get me wrong. I love Doug. Doug is adorable and hilarious and probably one of my favorite things to happen in a children’s movie ever. But he and his ilk do not belong anywhere near this movie.  The device of having intelligent, communicating dogs with high-tech collars brings up a lot more questions than it answers. Like I mentioned above, why not just put a tracker on a dog and have it follow “Kevin” into the labyrinth? They’re all so worried about getting lost in that place when they FREAKING HAVE GPS. What. No.

And then, there’s the question of why the hell Doug has been kept around this long at all. I mean, clearly he’s utterly useless in his capacity as a tracking and hunting dog, and it’s not like Charles is keeping him around for companionship. He’s also the only retriever in the bunch, which brings up a larger issue–where the hell did all of these dogs come from, anyway? They’re not descended from some original companion animal Charles brought along, because they’re all different breeds. Form over function, I guess? Or, in this case, “wouldn’t it be funny if…” over actual plot development.

I’m not even going to touch the fact that the dogs can fly airplanes. Yes, it’s a children’s film, but disbelief cannot be suspended at the end of a film. You have to plant the reality of absurd things like fighter plane dogs early on, or the whole thing just goes to shit. I will accept the house floating under balloons because the idea was planted earlier with the floating balloon cart. I will accept the existence of an absurdly large, semi-sentient bird because it was planted in the movie in the opening montage. But there is zero precedent for everything having to do with the dogs for the first forty minutes, and then it’s like BAM. TALKING DOGS. JUST ROLL WITH IT.

Uh, no, Pixar. I will not roll with it. You gotta earn my suspended disbelief, thank you very much.

I don’t think I need to say anything more on this point.

In short, Up is a lazy film that favors poorly thought-out one-shot jokes over carefully developed story lines. Its only redeeming portion is the first eleven and a half minutes, and after that you can pretty much just turn it off. Go watch Wall-E instead. Or, you know, read a book maybe? That’s what I’m gunna do.