Like many adolescent girls before me, I went through something of a Johnny Depp phase after Pirates of the Caribbean first came out. In the space of about a week, I went from “Johnny Depp who?” to “OH MY GOD YOU GUYS JOHNNY DEPP IS SO HOT,” in typical pubescent human fashion. But of course, since I was also already a huge film nerd, my Depp-obsession also meant that I had to devour his entire body of work. There are a lot of them. I still own seventeen of them. Seventeen. 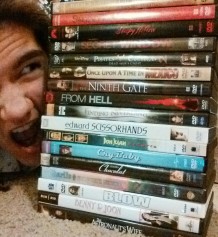 Luckily, I was not alone in this endeavor; whether for her own satisfaction or just in pursuit of quality bonding time, my mother agreed to tromp through Depp’s astonishingly prolific body of work with me. We made a list of his movies, taped it up next to the TV, and started working our way through. And quickly discovered that Depp has been in a lot of really terrible movies. Like, a lot of them. Many of them also contain other famous people, who probably also regret making them. It was a wild ride.

Before we get to the list, I have to report that my mother and I did not make it to the end of the Johnny Depp movie list. We gave it a valiant effort, crossing off more than half of the 27 movies then-released (2004), but in the end the task was just too daunting. This means that the list I am going to make is likely incomplete; chances are, a number of the films I did not see are also terrible, possibly more terrible than the winners I list here, but I have to work with the knowledge that I have.

Fear and Loathing in Las Vegas

I put this one first because I know I’m going to get shit for it, and why not go for the jugular. Based on the book by Hunter S. Thompson, this movie is suppose to be “a classic,” but frankly I don’t get it. Of all the movies on this list, this was the one we literally could not sit through. About 1/3 of the way into the film, I remember my mom saying, “do we really have to watch all of this?” and being utterly relieved that she’d said it first.

The basic premise here is two dudes, Raoul (Depp) and his lawyer Dr. Gonzo (Benicio Del Toro), do a whole shit ton of drugs and then road trip to Las Vegas, having a lot of hallucinations and picking a lot of fights with strangers, and probably other things, too. I don’t know–I didn’t finish it and I haven’t read the book (shhh it’s on the list). Anyone who reads this blog regularly knows that I am all in favor of movies that feel like a drug trip all on their own, but Fear and Loathing is a lot less “oh my god what’s happening” and a lot more “gee, I wish my drunk friends would sober up already so that I can stop putting up with their shit.” Basically, it isn’t entertaining. It’s just Johnny Depp in an utterly unattractive getup, thus negating even his physical appeal, parading around pretending to be high. It’s stupid. Don’t watch it.

So this psychologist, Dr. Jack Mickler (Marlon Brando), is only a few days from retirement when he gets a new patient–a young dude who believes himself to be the famous satirical and entirely fictional Spanish lover Don Juan (Depp). Over the course of 10 days, Don Juan tells the epic story of his lost love and the many ladies he banged in his quest to find her again, before ultimately getting rejected by her because she was pissed he wasn’t a virgin, and this story is so sensual and romantic and tragic that Dr. Mickler starts banging his wife again. There are a lot of softly lit scenes in mahogany-colored bedrooms with dramatic beach vistas. Ultimately, they conclude that the young man is, in fact, Don Juan, but they convince him to pretend to think he’s not so that he won’t be institutionalized. Because fuck it, that’s how psychiatry works, right?

Somehow, this film managed to make Johnny Depp having lots and lots of sex utterly boring. I’m not really sure how someone managed to get a brilliant idea like “let’s cast Johnny Depp as Don Juan” and then immediately follow it up with, “but spend half the movie focused on the lame sex life of a saggy Marlon Brando,” but this film is proof that the world is an inexplicable and sometimes tragic place. Alas.

This movie is basically the Da Vinci Code meets Supernatural, but a lot worse. I know. That sounds impossible. But listen: Depp plays Dean Corso, a rare-book seller motivated entirely by money (because rare books are such a lucrative business you know) who acquires some demonic texts, ends up on the shit list of an evil supernatural secret society, and then accidentally opens a door into hell. You know. Normal stuff. Throughout the film, he’s city-hopping all over Europe in pursuit of these texts and others that he can use to unravel the mystery, but all the cities are clearly just the same set over and over again, so instead it’s just a dude furtively running through the same alleyways over and over again. This wouldn’t be much of a problem if the plot weren’t so convoluted as to be indecipherable, leaving you with nothing to enjoy but the aesthetics.

Oh, and those demonic texts everyone is losing their shit over? They’re called The Nine Gates of the Kingdom of the Shadows, because that’s not so overly dramatic as to be boring or anything. Nope. Not at all.

Did I mention that Roman Polanski directed this one?

Because Hollywood doesn’t know anything about how space works, this film opens on two NASA astronauts hanging out outside of their space ship when some unexplained shit goes down and they get cut off for two minutes. After their rescue, the astronaut Commander Spencer Armacost (Depp) seems fine, but he starts being a total dick to his wife (Charlize Theron), kinda rapes her at a fancy dress party, and gets her pregnant with his alien baby. Because he’s been possessed by an alien, and for some reason this has caused his sperm to change into alien DNA and also change his wife’s eggs into alien DNA so she can become pregnant with an evil, psychic alien monster baby. It’s kind of like they took all the tropes surrounding demon babies and just went, “ummm, aliens could also do that, right?”

The fact that he’s possessed by an alien is suppose to be a secret, by the way. Like, you as the audience member are clearly intended to have doubts about whether he’s evilly possessed or just has PTSD, but to say they did not succeed at this ambiguity would be putting it lightly. This is not a subtle film. It ends with the wife electrocuting Armacost but not before it’s become clear that she’s also under evil alien power, because what’s the point. 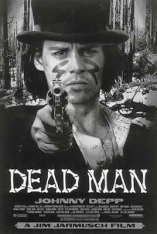 This movie is what happens when you try to turn a philosophical beat-generation poem into a feature length art film; it is basically Exhibit A for what kind of movies Johnny Depp would like to be making if he didn’t keep ending up in commercial world with his pretty face. Dead Man is complete, nonsensical bullshit.

Based on the poetic works of William Blake, Dead Man follows William Blake (Depp), a meek accountant turned frontiersman who meets a Native American called Nobody (Gary Farmer), who makes him do a bunch of weird shit to prepare him for the afterlife or something. I don’t know. It’s hard to tell what’s really going on, because half the movie is just, like…Depp staring at things. The film’s director described it as a “psychadelic western,” which I think is really code for “we just filmed a bunch of random, questionably racist footage and then pretended it had a plot.”

Credit where credit is due: this movie does make a lot of references to the actual poetry of William Blake, so at least it succeeds in being a tribute? Kind of? Maybe? A little bit? Mostly it’s just pretentious and pointless. Oh, and the whole thing is filmed in black and white, because it is Art. Iggy Pop and Billy Bob Thorton are in it. YOU GET THE IDEA.

At least they cast an actual American native to play Nobody instead of just using Depp. Looking at you, Lone Ranger.